"Chicago Talent" is an increasingly popular online web series that spotlights local Chicagoland talent and entrepreneurship. It was started by the nonprofit initiative, The Fresh Faces Project to expand its content have a continued storyline that consistently followed a certain group of people, aside form their normal stand-alone interviews. It's nominated for a 2019 Chicago Oscar for "Best Web Series." Having gained over 80,000 viewers online within its first two seasons, it already has an impressive following after less than a year! The series is reality style and shows the cast in their natural habitats working, creating art, and doing what they do best. It also includes sit down interviews with each cast member to get to know them personally on a deeper level. The entire concept is very unique to its market and is a great source for local talent to gain exposure, as well as insight into the lives of other creatives and business-minded individuals.

We had the honor of publishing some video content on our Facebook page from the Season 2 Celebration Party, and it was very nice. It was amazing to see a cast that was so passionate and happy to be a part of it all! We got to see some of our favorites! We saw the parents of the dynamic music duo, Teaneva. We saw the incredible voice-over artist and life coach, Julie Kaylin. We saw the fierce fashionista, Arella Swan. We saw the empowered autism awareness advocate, Benjamin Scott. We saw the selfless, philanthropist and Pageant Queen, La'Sonya. We saw the captivating talk show host, Nadia. We saw the sweet and sophisticated balloon artist, Iesha. And, we saw the enthralling entertainment editor, Nikoleta. Thank you to Travon of TC Photography for shooting the footage!

See What We Saw: Video Link

These along with the other cast members gave us a fantastic Season 2!

See the bios of the full Season 2 Cast here: https://chicagotalenttv.wixsite.com/takethestage/saeson-2-cast

While we didn't meet the Season 1 cast, we read their bios and saw their interviews as well! They all were nothing short of greatness. From the firey flame thrower and circus performer, Logan Cruz, to the ambitious producer and actress, Felice Tamara, we loved their stories. Seeing breathtaking vocal performances from the prodigy, Aly G, put a smile on our faces. Seeing the intense love of art and family from the artist Anthony Amos and his family was heartwarming. Watching 3 sisters, Mayra, Daniela and Ana, have a chance to talk and prepare for a major event was beautiful. Seeing behind the scenes footage of an all girl dance group gave us cool vibes. Oh yeah, and we're still waiting for a fashion and cookie conference from Deborah and Rita! Alongside many other awesome cast mates, they rocked the first season and sent "Chicago Talent" on a great pace from the very start. Talk about hitting the ground running! None of them disappointed in any way.

See the bios of the full Season 1 Cast here: https://chicagotalenttv.wixsite.com/takethestage/meet-the-cast

Now, for our quick notes on the Executive Producer-Creator of the show, and Founder of The Fresh Faces Project. Her name is Calynn M. Lawrence. She's a 23-year-old success junkie who feeds off of accolades and community service like they're her life source. As you may know, she's our first Icon on Fire and we will be releasing a documentary on her work and her life in the next few months. We just had a couple of quick questions for her regarding the success of her show. 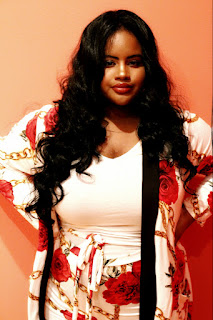 What are your thoughts on the success of "Chicago Talent"?
"I'm floored and eternally grateful for all of the support that the show has gained! I never thought that a concept I came up with in my pajamas talking on the phone with some business associates would be able to come to life and reach so many people. Not only are all of the cast and crew members AWESOME to say the least but, but the "fans" of the show are even cooler! I can not thank them enough because every like, share, comment, view comes from either the cast being super likeable, the crew's work being super, or the supporters helping us out. I could not ask for more."

How does it feel to know that you were able to put all of this together and pull it off at such a young age?
"Surreal to say the least. I honestly can not even describe my joy and my gratitude. It's not even necessarily that I feel I'm super young because there's thousands of people who've accomplished far more than I and they're my age or younger. Yet, I understand that I've worked very hard and I gave up so much of my youth for the very purpose of making a difference. I've been in the industry since I was 15 as a Business Intern at Nordstrom. And, gosh, do I feel like all of those late nights at work and tired mornings at school during my interning days were worth it. All of the term papers, and 9 hour school days when I was in college studying Business and Art and Marketing. All of those sleepy Saturdays that I spent years volunteering in my teen years at the school and the library and the youth center. I can definitely see how all of that was worth it now because it laid the foundation to who I am now as an entrepreneur. And, I have no one to thank but my parents, my family, my friends and my beloved supporters."

Where do you want "Chicago Talent" to go from here? Any teaser for Season 3 and the awesome talent that you'll spotlight for us?
"I hope that it only goes up from here! I hope that we can run as long as possible so that I can have the pleasure and the honor of featuring hundreds more inspiring and diligent talent. As far as teasers, the cast has not been finalized as of yet. However, I definitely have 2 new musicians who I'm looking to have on Season 3, which I'm planning to be the biggest season yet!

The first is a groundbreaking, multi-talented artist named Matthew. He is ludicrously skilled in so many ways that I feel need to be shared with the world. I mean, from his lyrics to his drawings to the way that he speaks to you in person, it's so abstract yet alluring, an enygma almost too good to be true. That's rare. And, as someone who has worked with literally hundreds of artists, I can genuinely say with confidence that he is different. The second is an artist with a ton of heart and a moving backstory that will bring tears from the toughest soldier, because it's that touching. His name is GC and he is a good friend to The Fresh Faces Project. I met him through another friend of the business, Nick Diaz. GC has an immense amount of talent that he has channeled into his music. After losing his sight as a teenager, he's managed to come further than many I know and I intend to make sure my audience gets a chance to meet him. "

With a successful conclusion to the first two seasons, "Chicago Talent" has made its mark in the online world. With resounding applause, we're gonna give it 5 stars! We look forward to seeing what the upcoming seasons have in store for us.